OSPAR comes from the fusion in 1992 of the Paris Convention for the Prevention of Marine Pollution from Land-based Sources and the Oslo Convention for the Prevention of Marine Pollution by navy and aircraft immersion operations. The latter was initiated following the shock of the oil spill from the Torrey Canyon March 18, 1967.
OSPAR is dedicated to the protection of the northeast Atlantic Ocean. It is a pilot fish. The work of its 5 committees – Biodiversity, Offshore Industry, Radioactive Substances, Environmental Impact of Human Activities, Hazardous Substances and Eutrophication – allows better understanding and combat of the many pressures on marine ecosystems from the open sea of Portugal to the Arctic Ocean. This success is notably materialized by a quality status report without concession of the OSPAR zone in 2010 (1). Seven years later, the OSPAR pilot fish is threatened of asphyxia by the Arctic countries. Robin des Bois has returned from the Biodiversity and Offshore Industry committees which gathered in Berlin and in Oslo the first two weeks of March.

Arctic
Within OSPAR, the divide between the northern and southern countries is worsening. The countries bordering the Arctic fear that the subarctic countries using the pretext of a good environmental management will intervene in the management of fossil and living resources like gas, oil, minerals and fishes.
Whether on biodiversity or offshore activities, the member states of OSPAR also members of the Arctic Council close ranks. They are led by Norway, Denmark, and Iceland. They consider that the Arctic Council (2), a non decision-making body unlike OSPAR, is the only competent system for the global management of the Arctic. This intensification has materialized by Norway’s threat in June 2016 to leave the OSPAR Convention during the debates on a Marine Protected Area draft proposal in the Arctic Ocean. Since then, the subject is in hibernation. Another example of the northern countries’ distrust is that OSPAR application as an observer of the Arctic Council has not yet been accepted. The first request was in 2009.

Biodiversity Committee. Berlin, March 6-10, 2017
The haploops and kelp threatened by exploitation, the destruction of habitats and chemical pollutions, are bearing the costs of this “cold war”. Their listing on the OSPAR List of Threatened and/or Declining Species and Habitats is delayed and will only include regions outside of the Arctic region at the request of Norway. The Netherlands will continue investigations on the haploops. Haploops are small crustaceans in the Amphipod order; they are about 15-20 mm long and live in colonies of tens of thousands by square meter, at a depth from 15 to 30 meters, in individual self-constructed tubes made up of a mix of mucus and mud. They form an underwater field of tubes so dense that the trawlers avoid them. They are spread out in all OSPAR regions. The haploops colonies off the coast of Brittany cover 3500 hectares in the Concarneau Bay and 7000 hectares in the Vilaine Bay. 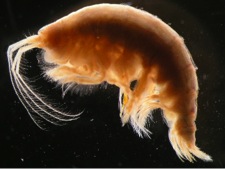 Kelp’s listing on the OSPAR’s species list also excludes the Arctic region, at the insistence of Norway. France, in favor of this listing, could take the lead on this work. The underwater forests of kelp spread from the Arctic to the open sea of Portugal. Kelps have many good qualities – they fight against coastal erosion by softening the power and velocity of waves, they contribute to carbon sequestration, they construct reserved habitats for a myriad of fishes, mollusks and plant species. Their exploitation in Brittany focused on hyperborea kelp is controversial (3).
The civil society was represented in Berlin by Robin des Bois, Oceana, WWF, and Greenpeace International. 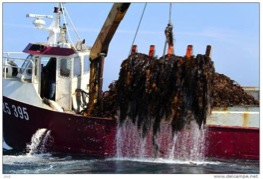 Offshore Industry Committee. Oslo, March 15-17, 2017
Sea birds are attracted by the lights of offshore platforms, exhaust in circling around, burn in the flares, or collide with the superstructures. Courageous terrestrial migratory birds like robins and song thrushes also suffer from this excessive mortality rate (4). The fog, haze, and rain that frequently occur in the North Sea reinforce the attraction to light. The density of birds in a 500-meter radius is 7 to 40 times superior around the platforms compared to unlit zones. To measure the mortality rate of birds, dedicated observers should be present on the industrial site 7 days a week for 2 months. The oil industry has been informed of the risks since at least 1980 and has never considered this surveillance mission as a priority.

The United Kingdom – 939 offshore installations on the 1751 of the OSPAR zone – does not want new constraints regarding this subject, but the Netherlands and Germany are demanding the application of the best available techniques to reduce light pollution. The Netherlands presented their implemented and planned methods on their platforms: removal of unnecessary lights particularly on uninhabited platforms, manual regulation of light or confinement of permanent light sources. The dossier is moving forward but next year each OSPAR country involved will have to submit a report. The subject is all the more important when considering the light pollution coming from offshore wind farms.

The existing and future oil activities of Norway and Greenland have too quickly been addressed in view of the environmental risks and the progressive transition of exploration and exploitation from the North Sea to the Arctic.
In the Norwegian waters of the Barents Sea, oil production in the Goliat field operated by the Italian company Eni began in March 2016. The production was interrupted twice because of technical problems. The management of Eni is strongly questioned by the Norwegian Petroleum Safety Authority. The exploitation began again in February 2017. It was again interrupted 8 days later.
The Barents Sea Exploration Collaboration (BaSEC) was initiated by Statoil, Eni Norge, Engie, Lundin, and OMV in April 2015. BaSEC currently gathers 17 companies. Among their objectives is the delimitation of possible new zones for the exploitation of oil and gas. Intervention plans in case of accident on the offshore platforms continue to be insufficient and ill-adapted. Whether discussing the rescue of employees or the effects on the environment, the response time is too long.

Concerning the plastics and microplastics discharges in the oceans by offshore platforms, OSPAR awakens. Each member state is requested to make a review of all plastics discharged in the ocean during offshore exploration and exploitation. A first assessment rough and uncertain listed 158 tons of solid plastics – qualified as Lost Circulation Materials (LCMs) – per year from the British industry alone.

Since 2013, Robin des Bois has encouraged the member states of OSPAR to make easily accessible information on their oil and gas platforms, which are cut off from the world and out of sight. One important first step has been made with the publication of a map of the installations giving access to a cursory identity card for each one of them (5). Robin des Bois pursues his work in order that these data are completed in the coming years with information on the accidental and chronic disposal of liquid and atmospheric sewage. In the OSPAR zone, offshore installations are responsible for an average of 487 of oil spills every year. The majority are less than one ton but also contribute to the mortality rate of birds and the contamination of marine food chains.
The civil society was represented in Oslo by Robin des Bois.

Screenshot of the OSPAR map with an example identity card for an oil platform.

(1) http://qsr2010.ospar.org/en/index.html [1]
While waiting for the new version of the Quality Status Report of the OSPAR zone planed for 2021, an intermediate assessment will be finalised this year. It will update the data on species and habitats representative of the state of the marine ecosystems like common bottlenose dolphins or orcas, as well as indicators like the average size of fishes and marine food webs organisation.
Canada, Denmark on behalf of Greenland, USA, Finland, Iceland, Norway, Russia, Sweden
(3) https://robindesbois.org/non-a-la-deforestation-sous-marine/ [2] (only in French)
(4) https://robindesbois.org/en/plus-de-transparence-pour-loffshore-et-moins-de-lumiere-2/ [3]
https://robindesbois.org/en/megatombe-de-rouge-gorges-en-mer-du-nord-2/ [4]
(5) http://odims.ospar.org/layers/geonode:ospar_offshore_installations_2015_01 [5]