The site Arzamas-16 is threatened by forest fires since the middle of July 2010. The exact location of the storage and waste on the site is unknown. The current management of plutonium storage, enriched uranium and nuclear warheads are the subject of diverging information. The military site is in activity since 1946. For more than half a century, experiments and nuclear activities have left undeniable traces on the site (see the assembly of photos). If the fire reaches strategic and radioactive sectors this could spark a major event but also cause global contamination. The Russian government and fire fighters lack of insight to foresee the risk caused by the fires around this dangerous site and to control them is shocking.

Silence from the International Atomic Energy Agency, the European Commission and the United States who established cooperation among scientists from Arzamas-16 is literally crazy. This is the other disaster.

Is the international community waiting for a nuclear excursion to happen to impose its technical assistance, and to send its heavy words on the imperative international solidarity at the same time as its condolences? 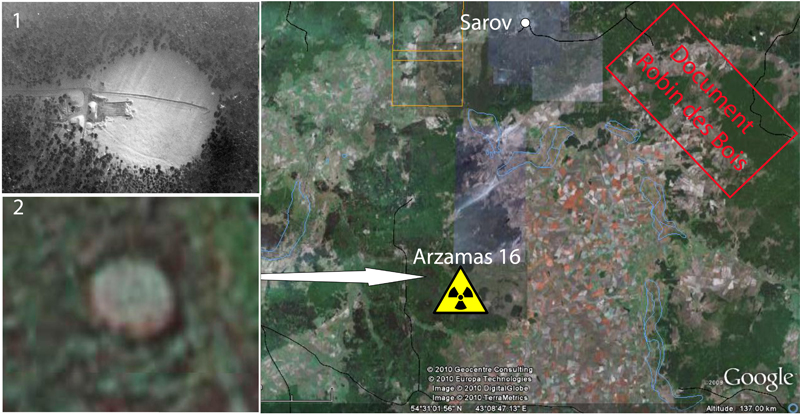 Arzamas-16. An eerie similarity captured by Robin des Bois between the photo (1) taken in February 5th 1960 by an American spy plane U-2 mission showing the explosive test shell site for nuclear warheads and a zoom (2) of a satellite photo taken by Google Earth in 2010.